Skip to navigationSkip to main contentSkip to footer 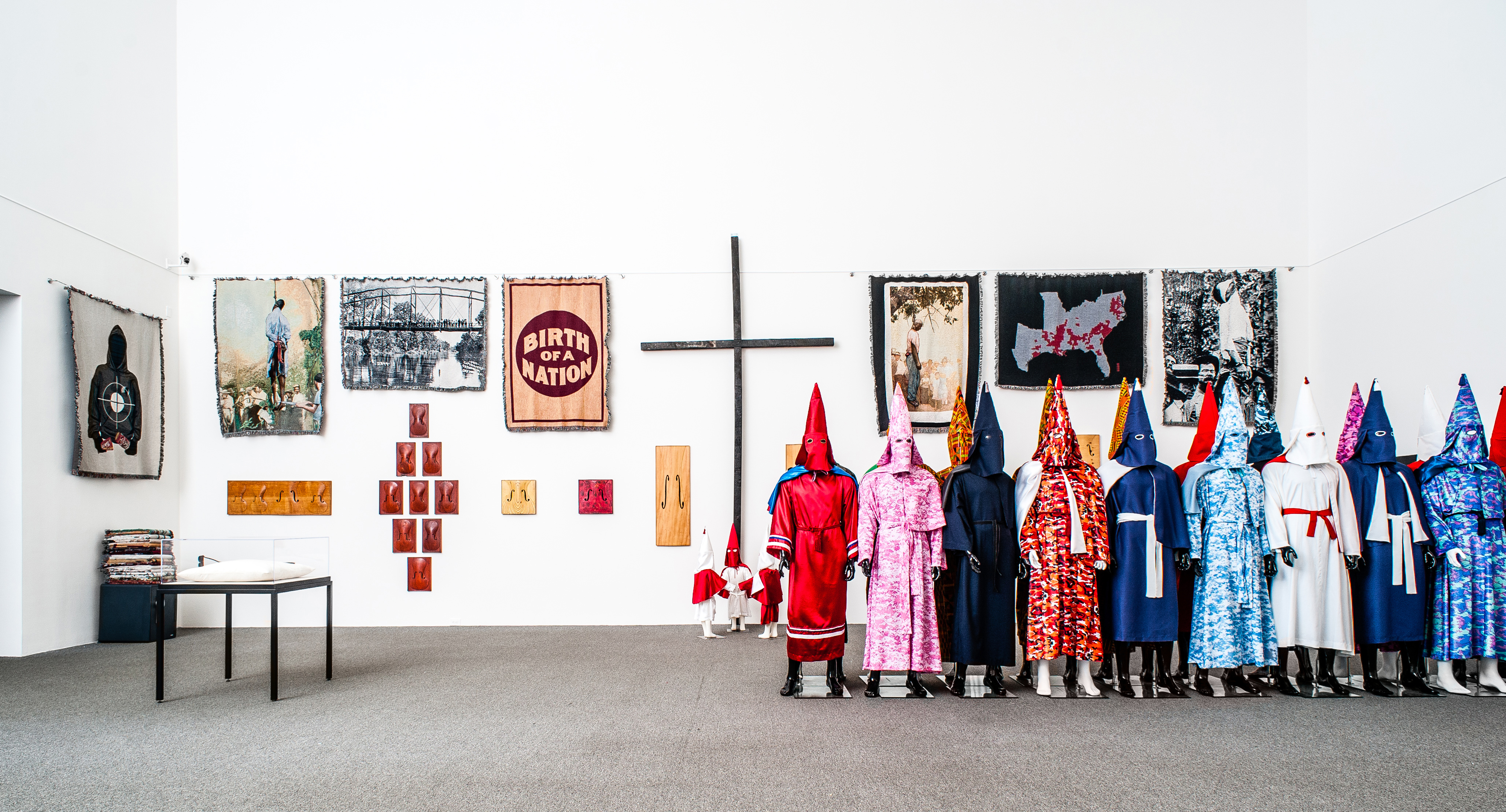 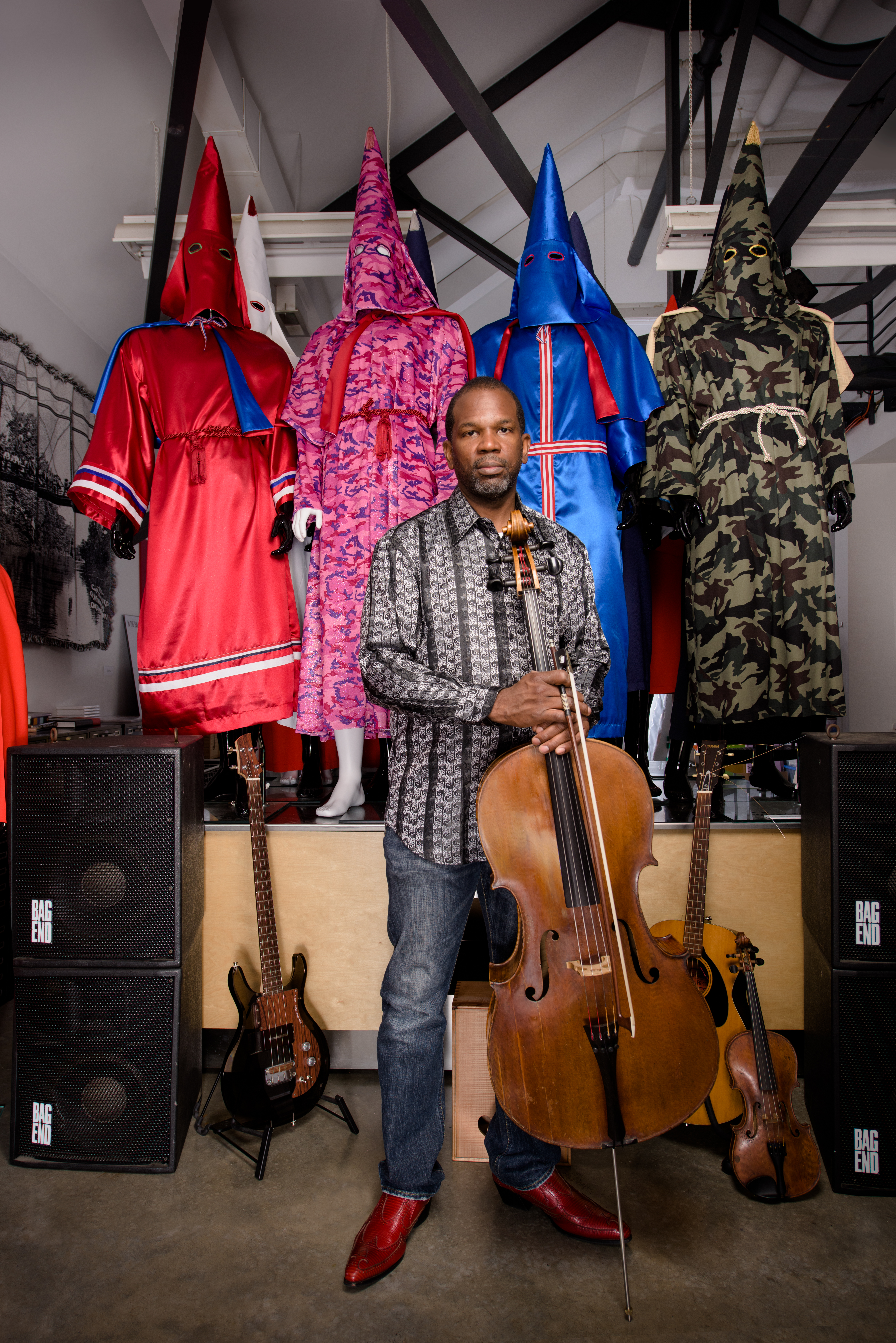 “These objects tell stories,” shares Paul Rucker. “I feel I am responsible for telling those stories -- stories of the people who were lynched, who never had the chance to tell their story. I can tell their stories.”

Paul Rucker is a Visiting Arts Fellow with the Institute for Inclusion, Inquiry and Innovation (iCubed) at Virginia Commonwealth University. He is part of the Racial Equity, Arts and Culture Transdisciplinary Core whose mission is to foster critical dialogue about and develop mechanisms for advancing the fair treatment of people of all backgrounds in and through arts and culture.

Rucker is embedded at the Institute for Contemporary Art at VCU and his work, Storm in a Time of Shelter, is part of the ICA’s inaugural exhibition, Declaration.

A long list of accolades, fellowships and residencies often accompany his name as his art continues to garner broader audiences, calling attention to widespread societal issues. Most recently, Rucker has been awarded the 2017 John Simon Guggenheim Fellowship, 2018 TED Fellowship, 2018 Arts Innovator Award from the Dale and Leslie Chihuly Foundation and has been named a 2018 Map (Multi-Arts Production) Fund Grantee.

As a visual artist, composer and musician, Paul Rucker surrounds viewers within an interactive art experience where he combines historical research, live performance, visual displays and artifacts such as slave branding irons.

The Prison Industrial Complex, racially-motivated violence and various issues relating to incarceration and its relationship to slavery comprise much of Rucker’s subject matter. His work calls for people to come, contemplate and consider one’s place within various systems and power structures of society.

“When I hold a slave branding iron,” shares Rucker, “or when I hold shackles from the 1800s for a 3-4 year old slave, slavery becomes tangible; it’s real. When you were a slave, your children were not your own. They could be taken away from you and sold.”

When considering these heavy topics, Rucker says, “Dialogue is important. I think it’s irresponsible to bring up issues such as race, any kind of violence, rape and/or injustices toward women or men without giving people a safe place to go to talk about these things.”

“It’s all about empathy and understanding,” says Rucker. “Art needs to be linked with policy. You can change policy all you want but if you don’t change the hearts and minds – the policy is essentially meaningless.”

“Art needs to be linked with policy. You can change policy all you want but if you don’t change the hearts and minds – the policy is essentially meaningless.”

(Click here to learn about Paul Rucker’s The Empathy Project, Maryland Institute and College of Art.)

Rucker’s artistic expression and ideologies are rooted in collective and personal histories. At 13 years of age, when talented Rucker was traveling with the All-State Orchestra through South Carolina, he was refused the right to stay overnight with the group’s host family on the basis of his skin color.

“It was amazing to me to be discriminated against at that age because of my color,” recounts Rucker.

Rucker’s father, born in 1905, grew up during the height of lynching, a time where mobs would hang African Americans from trees and publicly debase and dehumanize these bodies. Rucker shares that oftentimes primary and secondary schools would take their classes to view these public affairs. 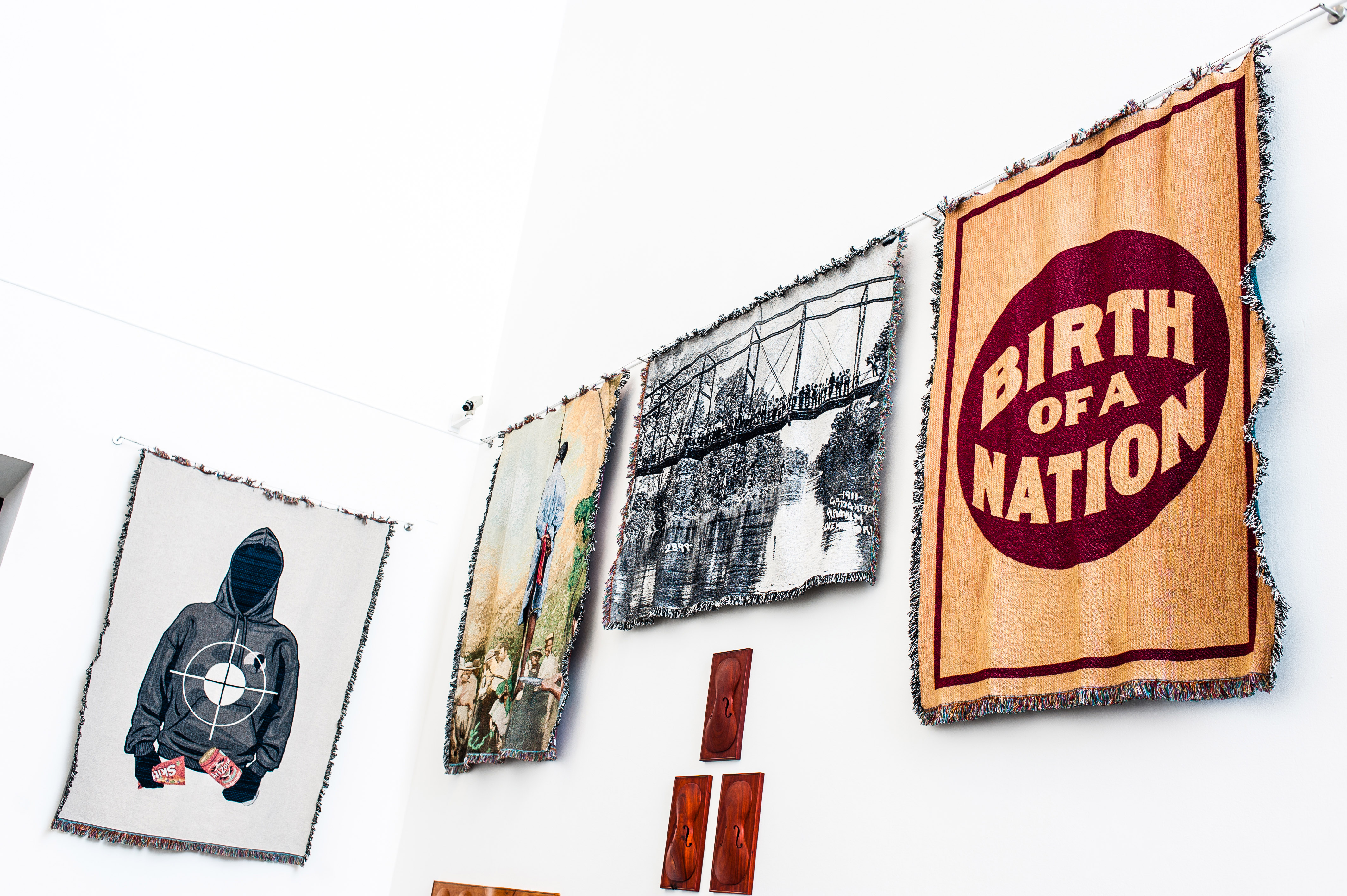 Rucker has created a number of pieces to depict and bring to life the gruesome realities of lynching. Works include Stories from the Trees and Throws. (Click to view video of Paul Rucker’s performance of Stories from the Trees at York College in 2017 – warning: presentation includes graphic images of violent acts against humans.)

Rucker’s mother was a self-taught musician who received a degree from the U.S. School of Music, learning the organ through a mail-order course.

“I still have her old books,” says Rucker with a smile. “She’s an amazing inspiration. I watched as she put on recitals for the church – she had a stage built, flowers brought in and a pretty dress made. That made me feel like I could put on a show.”

“If you see your parents or someone do something, you feel like you can do that, too,” reflects Rucker. “But,” he proposes, “What is your inspiration if your parents are doing other tasks that are not so glamorous? You may actually feel like that is your destiny, too, even though you are capable of more.”

Rucker confronts the power of storytelling in his recently funded work, The Power of the Narrator where he reimagines vintage lantern slides that were popular from the 1820s through 1910s.

“What is your inspiration if your parents are doing other tasks that are not so glamorous? You may actually feel like that is your destiny, too, even though you are capable of more.”

These lantern slides were sometimes used to portray and perpetuate negative stereotypes of laziness and other derogatory typecasts onto black Americans as a form of entertainment to gathered audiences. Along with animation, new composition, live music and theatrical performance, Rucker uses these repurposed lantern slides to instead illuminate the power that narrative has to shape generations of ideology.

Rucker began to identify himself as a visual artist in the late 1990s after moving to Seattle to pursue music. He moved into an artist live/work space after arriving to the city. While spending time in the art space, he worked as a janitor for the Seattle Art Museum. Surrounded by inspiring artists such as Chuck Close and Christian Marclay, he began experimenting and “painting little paintings” from unused and discarded materials people left behind after moving away from the art space.

“I knew I wanted to do interactive sound and video pieces that mattered,” shares Rucker. Not interested in selling his artwork for money, he took in what was happening around him, particularly the police brutality of Rodney King that led to the uprising in Los Angeles, and used art as his medium to make change. 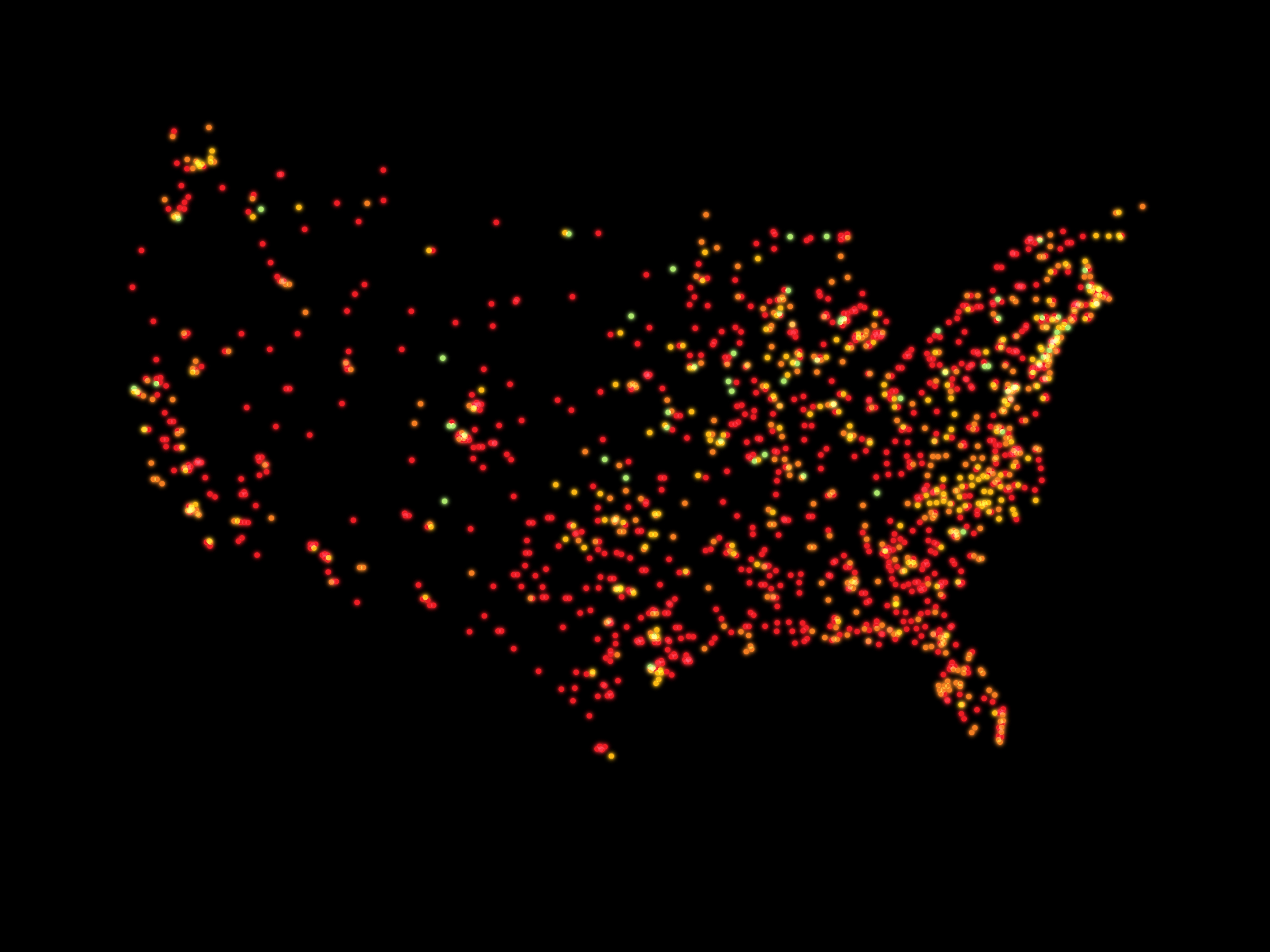 During a residency at the Blue Mountain Center, he created a collaborative data visualization piece which presents an historical time-lapse of the growth of prison construction since the 1800s. Through Proliferation, Rucker seeks to make tangible the oft-unimaginable $182 billion dollar prison industry. He notes that the U.S. has built at a rate of one new prison every week since 1976 even during times when crime rates were declining.

Rucker’s illuminating, yet harrowing work uncovers centuries of history and calls for a stark awakening in the hearts and minds of viewers to the uncomfortable interconnectedness of past and present. He calls viewers to encounter the past, address the present, and equitably work toward a changed future.

“We must have better standards for how we take care of each other.”

More of Rucker’s work is available by viewing his solo exhibition, REWIND.

About VCU Institute for Inclusion, Inquiry and Innovation (iCubed)

The Institute for Inclusion, Inquiry and Innovation (iCubed) at Virginia Commonwealth University (VCU) is a cutting edge institute focused on catalyzing collaborative connections between the university and the community at large through innovative academic and research programs. Our transdisciplinary core teams collaborate with key community members in order to develop holistic solutions to 21st century urban challenges within the Commonwealth. For more information about iCubed or to apply to one of the transdisciplinary core teams, please visit: icubed.vcu.edu.